Can you Dig It?

Ffynnon Beuno Shepherds Huts offers a unique experience for those who want to embrace North Wales in a different way. An off-grid glamping experience like no other, with fields of wildflowers and a historical cave to explore on the site.

It has been thoroughly enjoyable working with this client and seeing their business expand and grow so rapidly. Along with the interesting archaeological finds in the caves, they also offer glamping in Shepherd’s Huts and they have their own Tea Hut on site, with fresh tasty treats available. We are excited to see how they continue to develop and grow in the future.

In June this year, a team of hard-working archeology students set about on a three week dig at the Ffynnon Beuno “bone cave”. This excavation is going to feature on the BBC’s Digging for Britain program later on this year. 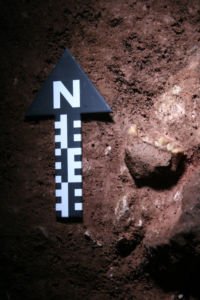 The aim of the dig was to uncover new information about our ancestors from around 30,000 years ago. The cave was first excavated in 1863 and it was found to contain flint tools from 36,000 BP and bones from a woolly rhino, mammoth and hyena. The cave at Ffynnon Beuno is of significant importance as it is only one of three sites in the UK to contain artefacts from Neanderthals immediately prior to their extinction.

This dig focused on continuing to explore the Victorian spoilheap for new evidence, that was overlooked by the original archaeologist Dr Henry Hicks in 1881; along with another section of the cave which has been previously unexplored.

Woolly rhino teeth were amongst the fabulous finds at the Ffynnon Beuno cave this year; the prehistoric fangs were discovered along with other animal teeth and bone fragments and a piece of flint that would have been worked by early humans.

The archaeological team discovered items missed and disregarded by the Victorians; this includes the animal remains that date back to the Ice Age. The new discoveries at the site have led the researchers to confidently assert that they belonged to the first homo sapiens that came to Britain.